by Michael Erpenbeck on April 27, 2021 under PowerShell
3 minute read

I’ve put together the information below as a guide for some PowerShell Stream concepts that I’ve found are not well understood by most engineers. Streams are a fantastic structure built by the PowerShell team, but have not been well communicated. 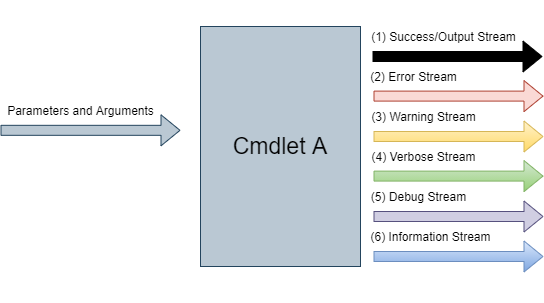 Most computing systems are built around only three standard streams: stdin (stardard in), stdout (standard out), and stderr (standard error). PowerShell is build with 6 standard output streams (as shown below). Note, as of this writing, the Progress Stream is under development.

Note that Write-Host has been refactored starting in PowerShell 5.0 to be a wrapper around the Write-Information cmdlet.

How streams work in PowerShell pipelines

When running a cmdlet and piping the output to another cmdlet, only the Success/Output stream is passed from the first cmdlet (Cmdlet A in the image) to the second cmdlet (Cmdlet B in the image). This is what the “Output” portion of the stream name signifies. As an example, running: Get-Process | Where-Object {$_.ProcessName -eq 'chrome'}

Will result in an output like the following where the Success/Output stream pushes an array of objects from the Get-Process cmdlet to the Where-Object cmdlet that uses the values to filter the object’s data. Note that the other streams are not passed in the pipeline. 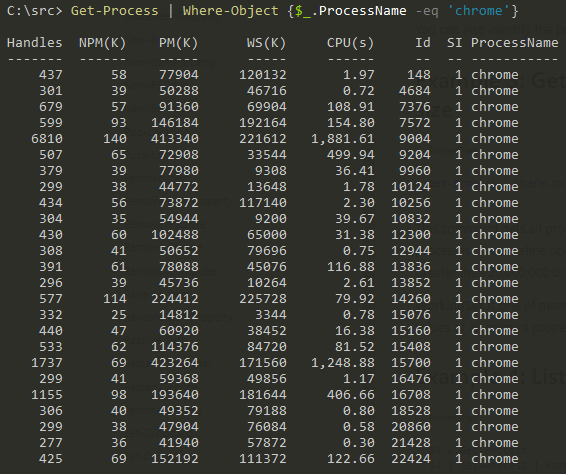 Since the Verbose stream is not passed through the pipeline, operations like the following do not get passed from the Write-Verbose to the Out-File and the “B.txt” file is created but is empty.

The redirection operator 4>&1 looks cryptic, but it makes sense when you parse it. It means that the Verbose stream (4) is redirected to the Success/Output Stream (1). This action is shown graphically in the image above.

The result is as shown below.

Additionally, operations like the following do not work with the conventional > redirection symbol as this redirects only for the success/output stream. Using the redirection of 4> to a file tells PowerShell to push the Verbose stream to the file named “.\A.txt” in the example below.

PowerShell
I feedback.
Let me know what you think of this article on twitter @Erpenbeck!